Let me re-establish that I do not like reality shows. First of all they are not real. If you want reality go look at a security camera video for twelve hours. Pretty boring huh? Now if you actually look through that twelve hours of security footage consider yourself lucky if there is more than one minute of anything that would fall under the category of interesting. Reality shows are cheap to produce (although more and more money is now going into other aspects of the production). They also put a lot of actors and writers out of work. If I had to define what a reality show is I’d do it this way.

re·al·i·ty show (Oxy Moron) Definition:
A Television Show featuring people who are supposedly not actors who are manipulated in situations onstage (or in postproduction) supposedly with out scripted dialogue.

For the record I do not watch American Idol. Even if I did not have these feelings towards reality shows this type of talent competition is still not my cup of tea. I was very disturbed when I saw Idol's unholy trio Simon Cowell, Paula Abdul and Randy Jackson mocking two would be contestants who by all outward appearances may not have had full use of their mental capacities. I do not have a problem with an industry professional giving constructive criticism to an aspiring singer. I also do not have a problem with an industry professional giving a reality (no pun intended) check to a reasonable person with a false sense of their own talent. Where I do have a problem is when industry professionals are making fun of two disadvantaged individuals especially when Simon Cowell told Kenneth Briggs that he looked like a "bush baby", and asked Jonathan Jayne if he borrowed Randy Jackson's trousers. One would think that with all the millions that FOX is paying Simon he could do better than to open with a fat joke. The New York Times later reported that Jonathan Jayne had said he had appeared in the Special Olympics, an event for the mentally challenged. Simon Cowell told television writers at a news conference, "If you don't want to hear that, don't show up". I'm sorry Mr. Cowell but your statement would only hold water if you were dealing with reasonable people. This is when you and the other American Idol judges lowered your selves to the level of Howard Stern. Still the fact that producers screen the contestants prior to them meeting the judges, then decided to air the audition with the judge’s comments leads one to believe that they welcomed and even instigated the controversy. Still there are some that defend the judge’s behavior due to fatigue. Please show me another job where you can use fatigue as an excuse for that level of rudeness. Considering that a big part of their million-dollar job is to listen to bad singers, I don't want to hear about their fatigue. Now Kenneth Briggs and Jonathan Jayne have agents and have appeared on several television programs giving American Idol even more free press. Give me an old fashioned sitcom any day.

Not to start singing the same old song (pun intended) but why is this news? I know of this American Idol incident because while watching the cable news channels expecting to learn more about the direction that this war is going and who might be the next president, this reality show makes the news. Even while I write this I have the news on and this is the story that is being covered. The fact that we the people give so much attention to a reality show speaks volumes as to why this country is in the state that it is currently in. Since I am already singing I wanted to make a comment to the parents watchdog groups. You are outraged when you see adult themes in a piece of well acted and well written drama at 10:00pm because "Our Children Are Watching". Yet when real people, whose opinions are respected, mock the disadvantaged among us at 8:00pm and I don't see that same outrage. Long ago I had a friend who told me that television executives are people who sit in their offices finding new ways to get suckers saying, "We need a show that will bring us some new suckers". I never agreed with his description of television executives. I never liked that he called TV viewers "Suckers" because they are fans of a show. But in the case of reality shows he might be right.

To quote The View's Rosie O'Donnell on this topic, "If you keep serving people crap and telling them it's a meal, they're eventually going to think it is a meal".

As you know from past blogs that I am a big fan of The Munsters The Beauty of The Munsters & The Addams Family. Working as a Universal Studios Tour guide, I have seen the Munsters House inside and out more than most people have watched the series. I am saddened by the loss of Yvonne De Carlo. Ms. Decarlo took the part of "Lily" on "The Munsters" to help pay husband Bob Morgan's medical bills. Morgan, an actor/stuntman, had suffered near-fatal injuries while filming "How the West Was Won." By her own admission, Ms. De Carlo never imagined, that "Lily Munster" would become her most famous role. Along with her work in film and Television Ms. DeCarlo performed on Broadway, notably in the role of Carlotta Campion, introducing the song "I'm Still Here" in the Stephen Sondheim musical Follies.

To Quote Lily Munster, "Oh, Marilyn... the circles under your eyes. How lovely you look today".

A Series of Brief Dramatic Pieces originally Composed in a Small Black Notebook with a Fountain Pen by Joseph Dougherty
More communication from the corporate world. Coincidence? You be the judge. Handwritten Theatre Sixteen: "I think it went well." Performed by Tony Figueroa
Running Time: 5:22 All Audiences.
Posted by Tony Figueroa at 12:45 PM No comments:

To quote Dave Garroway, the first host of the Today Show who closed each program with an upraised hand and the single word, "Peace". 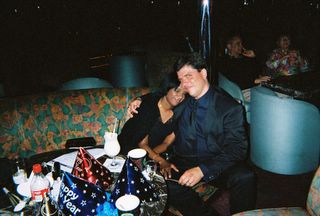