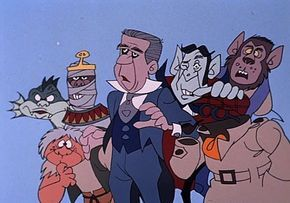 Here is another
"Mental Sorbet"
A little spark of madness
that we could use to momentarily forget about those
things that leave a bad taste in our mouths
Mad Mad Mad Monsters is a 1972 traditional animated comedy film produced by Rankin/Bass Productions in the United States and animated overseas by Mushi Production in Japan. The special aired on September 23, 1972 as an episode of The ABC Saturday Superstar Movie. It is "related" to the 1967 stop motion animated film Mad Monster Party?

Posted by Tony Figueroa at 5:10 PM No comments:

The TV version of the show ran for the next 15 years.

Jack Benny was born Benjamin Kubelsky in 1894. His father, a Lithuanian immigrant, ran a saloon in Waukegan, Illinois, near Chicago. Benny began playing violin at age six and continued through high school. He began touring on the vaudeville circuit in 1917. In 1918, he joined the navy and was assigned to entertain the troops with his music but soon discovered a flair for comedy as well. After World War I, Benny returned to vaudeville as a comedian and became a top act in the 1920s. In 1927, he married an actress named Sadye Marks; the couple stayed together until Benny's death in 1974.

Benny's success in vaudeville soon won him attention from Hollywood, where he made his film debut in Hollywood Revue of 1929. Over the years, he won larger roles, notably in Charley's Aunt (1941) and To Be or Not to Be (1942). Movies were only a sideline for Benny, though, who found his natural medium in radio in 1932.

In March 1932, then-newspaper columnist Ed Sullivan, dabbling in radio, asked Benny to do an on-air interview. Benny reluctantly agreed. His comedy, though, was so successful that Benny was offered his own show almost immediately, which debuted just a few months later. At first a mostly musical show with a few minutes of Benny's comedy during interludes, the show evolved to become mostly comedy, incorporating well-developed skits and regular characters. In many of these skits, Benny portrayed himself as a vain egomaniac and notorious pinchpenny who refused to replace his (very noisy) antique car and who kept his money in a closely guarded vault. His regulars included his wife, whose character, Mary Livingstone, deflated Benny's ego at every opportunity; Mel Blanc, who used his famous voice to play Benny's noisy car, his exasperated French violin teacher, and other characters; and Eddie Andersen, one of radio's first African American stars, who played Benny's long-suffering valet, Rochester Van Jones. The program ran until 1955.

In the 1950s, Benny began experimenting with television, making specials in 1950, 1951, and 1952. Starting in 1952, The Jack Benny Show aired regularly, at first once every four weeks, then every other week, then finally every week from 1960 to 1965. Benny was as big a hit on TV as on the radio. Despite the stingy skinflint image he cultivated on the air, Benny was known for his generosity and modesty in real life. He died of cancer in Beverly Hills in 1974.

Winkler is best known for his role as Fonzie on the 1970s American sitcom Happy Days. "The Fonz", a leather-clad greaser and auto mechanic, started out as a minor character at the show's beginning, but had achieved top billing by the time the show ended. Winkler started acting by appearing in a number of television commercials. In October 1973, he was cast for the role of Arthur Herbert Fonzarelli, nicknamed The Fonz or Fonzie, in the TV show Happy Days. The show was first aired in January 1974. During his decade on Happy Days, Winkler also starred in a number of movies, including The Lords of Flatbush (1974), playing a troubled Vietnam veteran in Heroes (1977), The One and Only (1978), and a morgue attendant in Night Shift (1982), which was directed by Happy Days co-star Ron Howard.

After Happy Days, Winkler put his acting career on the back burner, as he began concentrating on producing and directing. He quickly worked on developing his own production company and, within months, he had opened Winkler-Rich Productions.

He produced several television shows including MacGyver, So Weird and Mr. Sunshine, Sightings, and the game shows Wintuition and The Hollywood Squares (the latter from 2002–2004 only). He also directed several movies including the Billy Crystal movie Memories of Me (1988) and Cop and a Half (1993) with Burt Reynolds.

As the 1990s continued, Winkler began a return to acting. In 1994 he returned to TV with the short-lived right-wing comedy Monty on Fox which sank in mere weeks. Also in 1994, he co-starred with Katharine Hepburn in the holiday TV movie "One Christmas", her last film. In 1998, Adam Sandler asked Winkler to play a college football coach, a supporting role in The Waterboy (1998). He would later appear in three other Sandler films, Little Nicky (2000) where he plays himself and is covered in bees, Click (2006, as the main character's father), and You Don't Mess with the Zohan (2008). He has also played small roles in movies such as Down to You (2000), Holes (2003), and I Could Never Be Your Woman (2007).

Winkler recently had a recurring role as incompetent lawyer Barry Zuckerkorn in the Fox Television comedy Arrested Development. In one episode, his character hopped over a dead shark lying on a pier, a reference to his role in the origin of the phrase "jumping the shark". After that episode, Winkler in interviews stated that he was the only person to have "jumped the shark" twice.

When Winkler moved to CBS for one season to star in 2005–06's Out of Practice, his role as the Bluth family lawyer on Arrested Development was taken over by Happy Days co-star Scott Baio in the fall of 2005, shortly before the acclaimed but Nielsen-challenged show ceased production.

In October 2008, Winkler appeared in a video on funnyordie.com with Ron Howard, reprising their roles as Fonzie and Richie Cunningham, encouraging people to vote for Barack Obama. The video entitled "Ron Howard’s Call to Action" also features Andy Griffith.

The Rally to Restore Sanity and/or Fear.

The gathering that took place on October 30, 2010 at the National Mall in Washington, DC. The rally was led by Jon Stewart, host of the satirical news program The Daily Show, and Stephen Colbert, in-character as a conservative political pundit.  About 215,000 people attended the rally, according to aerial photography analysis by AirPhotosLive.com for CBS News.

The rally was a combination of what initially were announced as separate events: Stewart's "Rally to Restore Sanity" and Colbert's counterpart, the "March to Keep Fear Alive." Its stated purpose was to provide a venue for attendees to be heard above what Stewart described as the more vocal and extreme 15–20% of Americans who "control the conversation" of American politics, the argument being that these extremes demonize each other and engage in counterproductive actions, with a return to sanity intended to promote reasoned discussion. Despite Stewart's insistence to the contrary, news reports cast the rally as a spoof of Glenn Beck's Restoring Honor rally and Al Sharpton's Reclaim the Dream rally.

I Dream of Jeannie... Fifteen Years Later is a 1985 made-for-television film produced by Columbia Pictures Television which premiered on NBC on October 20, 1985. It is the first of two reunion films based on the 1965–70 sitcom I Dream of Jeannie.

Barbara Eden reprises her world-famous role as the magical Jeannie; also reprising their roles from the original series were Bill Daily as Tony's fellow astronaut and best friend Roger Healy, and Hayden Rorke (in his final film role) as NASA psychiatrist Dr. Alfred Bellows. The role of Tony Nelson was played by Wayne Rogers, best known for his role as Trapper John McIntyre on the 1970s series M*A*S*H. Larry Hagman was unavailable to reprise his role as Tony Nelson reportedly because he was too busy filming his CBS series Dallas at the time.

The film was directed by William Asher (who was also director of the 1960s show Bewitched) and the teleplay was written by Irma Kalish.

Talk show host Johnny Carson is born in Corning, Iowa. After studying journalism in college, Carson began working in radio and television. He began writing for TV shows in the 1950s and hosted his own show, Carson's Cellar, in 1951. He began occasionally guest hosting for Jack Paar on The Tonight Show and became the show's permanent host in 1962. He retired in 1992 and died in Los Angeles on January 23, 2005.

Here is another
"Mental Sorbet"
A little spark of madness
that we could use to momentarily forget about those
things that leave a bad taste in our mouths
The Paul Lynde Halloween Special is a Halloween-themed television special starring Paul Lynde broadcast October 29, 1976 on ABC. It featured guest stars Margaret Hamilton in a reprisal of her role as the Wicked Witch of the West from The Wizard of Oz. Also guest starring are Billie Hayes as Witchiepoo from H.R. Pufnstuf, Tim Conway, Roz Kelly, Florence Henderson, rock band Kiss, Billy Barty as Gallows the Butler, Betty White and, in an unbilled surprise appearance, Donny and Marie Osmond. The special aired only once.

The show was originally staged live before a studio audience (during its first three months, it originated from the Mansfield Theatre in New York, then relocated to CBS' Columbia Square facilities in Los Angeles). Ever the businessman, Burns realized it would be more efficient to do the series on film (beginning in the fall of 1952); the half-hour episodes could then be syndicated. From that point on, the show was shot without a live audience present, however, each installment would be screened before an audience to provide live responses prior to the episodes being broadcast. With 291 episodes, the show had a long network run through 1958 and continued in syndicated reruns for years.

Best-known for his role as Mike Seaver on the television situation comedy Growing Pains, as well as several other television and film appearances as a child actor. Recently, he portrayed the lead roles in the Left Behind film series and in the 2008 drama film, Fireproof.

Cameron is also an active Christian evangelist, currently partnering with Ray Comfort in the evangelical ministry The Way of the Master, and has co-founded The Firefly Foundation with his wife, actress Chelsea Noble. He stated that his main priorities in life are: "God, family, career — in that order," and he says that this decision has had negative consequences on his career. 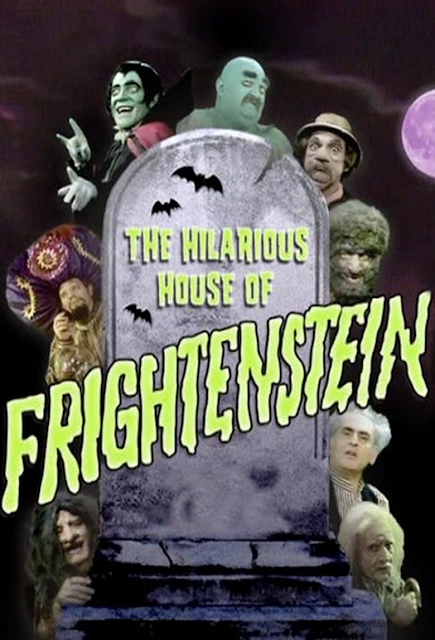 The Hilarious House of Frightenstein is a Canadian children's television series, which was produced by Hamilton, Ontario's independent station CHCH-TV in 1971. It was syndicated both in Canada and internationally, and occasionally still appears in some television markets. In Canada, the series has not aired on broadcast TV for several years, but is available on streaming service Crave.