Show No. 230 with guests Charlie Barrett and Mark BennettOriginal Airdate: Week of Apr. 23-28, 2014First hour: Tony, Donna and Ed take a look at what Comedy Central might do next year in light of the recent announcement that Stephen Colbert will succeed David Letterman as host of The Late Show in 2015. Also in this hour: An encore presentation of a replay of our July 2013 visit with Charlie Barrett. Charlie runs The Barrett Company, one of the top PR and marketing communications firm in the entertainment industry since 1992. Prior to starting his own company, Charlie was charge of media relations for such shows as The Tonight Show with Johnny Carson.
Second hour: Ed welcomes Mark Bennett, author of The Big Show, a new novella that is also a memoir of Mark’s years working with legendary producer and director Fred de Cordova. Though set in the world of set business, The Big Show is a story about mentorship that readers will enjoy no matter what their profession.
Posted by Tony Figueroa at 4:25 PM No comments:

Michael St. John, Film Noir and the Worlds Fair: Next on TVC

Actor and author Michael St. John and film historian Alan Rode will join us on the next edition of TV CONFIDENTIAL, airing Apr. 30-May 5 at the following times and stations:

Indiana Talks
Marion, IN
Weekends, various times
Click on the player at IndianaTalks.com
or use the TuneIn app on your smartphone and type in Indiana Talks

KHMB-AM 1710
Half Moon Bay, CA
Sunday 5/4
9pm PT
Monday 5/5
Midnight ET
Click on the Listen Live button at KHMBRadio.com
or use the Live365 app on your smartphone and type in KHMB

Our second hour will include a return appearance by Michael St. John, actor, author, playwright, onetime San Francisco radio personality and the first African-American man hired as a director for NBC television. Michael’s play, I Feel Sin Comin’ On, which he adapted partly from his memoir, Hollywood Through the Back Door, received critical acclaim when it was performed as a dramatic reading earlier this year in Los Angeles. We’ll talk about the play, but we’ll also ask Michael about working on such classic shows as Laugh-In and The Andy Williams Show at the legendary NBC studios in Burbank. Michael St. John will join us in our second hour.

Joining us in our first hour willAlan Rode, one of the foremost experts on the subject of film noir, and the author of such books as Charles McGraw: Biography of a Film Noir Tough Guy. Alan is also the producer and host of The Arthur Lyons Film Noir Festival, which will take place May 8 thru May 11 at the Camelot Theatres in Palm Springs. The lineup will include screenings of Sunset Boulevard, The Window, Sorry, Wrong Number, Too Late for Tears, Laura and the original 1946 version of The Killers, while the weekend’s scheduled guests include Barbara Hale, Nancy Olson, Terry Moore, Susie Lancaster and Barbara Stanwyck biographer Victoria Wilson. We’ll ask Alan about the eternal appeal of film noir, plus we’ll preview his upcoming book on iconic film director Michael Curtiz.

Plus: Tony Figueroa and Donna Allen with a look at some of the early experimental broadcasts at the 1939 Worlds Fair, which included a speech by Franklin Delano Roosevelt, the first televised speech by a U.S. president.
TV CONFIDENTIAL: A radio talk show about television
Wed and Sun 8pm ET, 5pm PT on WROM Radio
Wed 9pm ET, 6pm PT on WYYR: Yesteryear Radio
Fri 7pm ET and PT on Share-a-Vision Radio, KSAV.org
Weekends, various times, on IndianaTalks.com
Sun 11am ET, 8am PT KSCO-AM 1080 (San Jose, Santa Cruz and Salinas, CA)
Sun 11am ET, 8am PT KOMY-AM 1340 (La Selva Beach and Watsonville, CA)
Sun 8pm ET, 5pm PT Boost Radio Network
Sun 9pm PT, Mon Mid ET on KHMB-AM 1710 (Half Moon Bay, CA)
Mon 10pm ET, 7pm PT on The Radio Slot Network
Replays various times throughout the week on the Entertainment Channel at PWRNetwork
Tape us now, listen to us later, using DAR.fm/tvconfidential
Also available as a podcast via iTunes, FeedBurner
and now on your mobile phone via www.stitcher.com/TVConfidential
Follow us online at www.tvconfidential.net
Follow us now on Twitter: Twitter.com/tvconfidential
Like our Fan Page at www.facebook.com/tvconfidential
Posted by Tony Figueroa at 12:00 AM No comments:

Listen to me on TV CONFIDENTIAL:

As always, the further we go back in Hollywood history, the more that fact and legend become intertwined. It's hard to say where the truth really lies. 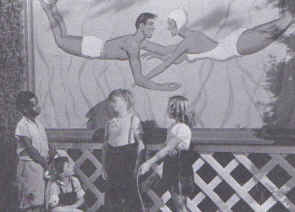 The first film, featuring a band of mischievous youngsters, was produced in 1922 by Hal Roach. Roach produced the short films until 1938, when he sold the rights to MGM. In all, more than 100 Our Gang films were made. Later, they were shown as TV comedies under the name "The Little Rascals."
April 30, 1939
NBC began regular U.S. television broadcasts, with a telecast of President Franklin D. Roosevelt opening the New York World's Fair.
Programs were transmitted from the NBC mobile camera trucks to the main transmitter, which was connected to an aerial atop the Empire State Building.